Many of our customers ask how the distinct markings in reclaimed wood came to be. Here are images and background that explain those curious marks.

The thousands of sawmills in New England for about 200 years beginning in the 1630s used essentially a single technology—a wooden waterwheel with a crank connected by the ‘pitman’ arm to a wooden sash (frame) in which was mounted a straight saw blade. The reciprocating motion of the vertically mounted saw results in the characteristic straight “up and down” saw marks on boards and timbers cut on these sash-type saws. 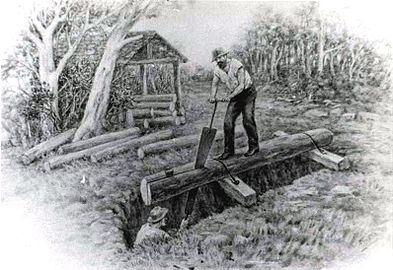 A whipsaw or pitsaw was originally a type of saw used in a saw pit, and consisted of a narrow blade held rigid by a frame and called a frame saw or sash saw. This evolved into a straight, stiff blade without a frame, up to 14 feet long and with a handle at each end, the upper called the tiller and the lower one being the box, so called from its appearance and because it could be removed when the saw was taken out of one cut to be positioned in another <Salaman, 426-429>. It was used close to the felling site to reduce large logs into beams and planks. Sawyers either dug a large pit or constructed a sturdy platform, enabling a two-man crew to saw, one positioned below the log called the pit-man, the other standing on top called the top-man. The saw blade teeth were angled and sharpened as a rip saw so as to only cut on the downward stroke. On the return stroke, the burden of lifting the weight of the saw was shared equally by the two sawyers, thereby reducing fatigue and backache. The pitman had to contend with sawdust in his mouth and eyes and the risk of being crushed by a falling log, although modern photographs <Arnoult, Annie, La Grande Histoire des Scieurs de Long> show the saw dust falling, as would be expected, away from the pitman, the teeth being on the opposite edge from him.

Ten foot logs were sometimes sawn into boards except for about the last two inches. In this way the boards could be more easily handled; then the boards were separated by cutting off the end of the log.[8]

Up to 200 boards a day could be produced with water-driven power sawing, compared to the 12 or so a day by two men in a saw pit. A saw pit could, if circumstances demanded, be worked by a single person, the end of the saw being weighted with a stone or some other weight, and then raised and lowered by the sawyer.[9]

Originally, circular saws in mills had smaller blades and were used to resaw lumber after it passed through an “up and down” (muley or sash) saw leaving both vertical and circular saw marks on different sides of the same piece. These saws made it more efficient to cut small pieces such as lath. After 1813 or 1822 saw mills use large circular saws, up to 3 meters (9 ft) in diameter. Large saws demand more power than up-and-down saws and did not become practical for sawing timbers until they were powered by steam engines. They are either left or right-handed, depending on which side of the blade the plank falls away from

I grew up in a small town. At one time it was known as “Slab City”.  Slabs being, in this case, granite not wood. Stone and wood.  Two substances found in old barns living parallel lives one being a little more resilient than the other.

Granite is the principal rock, of which there is much of a fine quality quarried. The soil is sandy, or a sandy loam. Pine is the most  numerious wood, but alternating with hemlock, maple, birch and poplar.

At South Chesterville, situated on Parker’s Pond,  there are a lumbermill and a grist-mill. North
Chesterville, or Keith’s Mills,  on Wilson’s Stream, is the centre of the wholesale manufacture of wagons and sleighs, which have a reputation throughout the State. The machine work is done  at the village, but the larger part of the labor is performed on the neighboring  farms; thus mingling the labors of the farm and the shop. 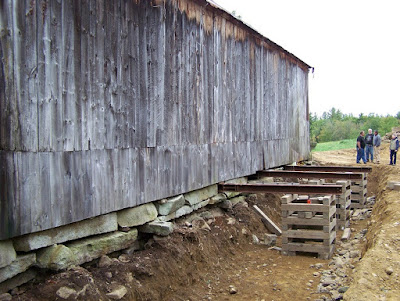 Have you ever driven by an old barn in a field with a sagging roof, off-kilter sliding doors, weathered clapboards or shingles and pane-less windows? If so, do you wonder like I do?  I wonder about many things. Who worked there?  What was it used for?  How was it built and where did the material come from?

Each one of these glorious structures holds its own story and the stories of those who crossed its path. The stories of hard-working men and women. Of sweat, hay chaff, and all manner of implements and, of course, the quadrupeds that took up shelter in them and provided meat and milk and bloody shins.

Barns, like some other types of architecture, can give the appearance of being simply built. Their transparency lends to their likability in both an aesthetic sense and in form and function. Sturdy, airy, purposeful things with lines and angles and substance. And of course, boards. Lots to be certain, made from pine, hemlock, fir, cedar and sometimes hardwood varieties, and… nails–the rusty, gnarly, make sure your tetanus is up to date sort.

This story (as most stories do) has a beginning, a middle and an end.  Curiously and appropriately the story of a barn board is not easily told. Do we start with the tree, the sawyer or the builder?  Do we really know what happens in the middle?  Sometimes we can only ascertain facts from available clues–photos, accounts, or what is, in fact, written on the walls. However, the ultimate question is: Where will it end? Unlike mortals barn boards have been known to have many lives so the more apt question should be whether it will rot or be buried in the ground, go up in flames or…. be reborn to serve another purpose?  In a coffee table where it will be covered with generations of books, magazines and coffee stains. Possibly in a picture frame wrapped around an image of itself.

If these walls could talk.  Let this story be told…

Our latest project in Vienna, Maine is this great structure that was at one time the Mineral Spring Hotel. Opened in 1879 it has some fantastic features and great old wood.

We are overhauling our website! It’s been a long time coming but we are finally getting to this project. Our plan is to start an e-commerce solution so customers can purchase our super cool items without having to leave their house–not that we wouldn’t want to meet you but we get how it is. So wish us luck and send any feedback you think would be helpful.

< Previous Next >
+ Add your own event Eventbrite